Where do you start with Slovenia? Firstly, thanks to the fly anywhere option on skyscanner.com and the internet in general for directing us towards Slovenia. I’d like to start, and I will finish by saying Slovenia is an amazing and beautiful country full of surprises. We landed in Ljubljana (hard to pronounce, easy to fall in love with) via Frankfurt early on Friday, April 1st. The first thing we noticed was how small the airport was, but after a week there, the airport's size pretty much corresponds to most things you'll find in the country. Nothing is too big, or too far, in Slovenia, but as the locals note size doesn’t matter.  The second thing we noticed, was how green and picturesque it all looked.
Like most other European countries, most things in Slovenia are quite efficient, and before we knew it, we were in our hire car and en route to Ljubljana. Our first accommodation of the trip was far enough out in the suburbs to seem like we were out in the countryside, rather than, into the outskirts of a nation's capital city. We left the hire car in the hotel carpark and availed of the taxi service suggested by the hotel staff. The short taxi ride only cost 3 euros, which amazed me seeing as Ireland has the same currency, but everything is triple the price back home (in Dublin, the meter would be up to a fiver once the driver spots you shuffling towards the car). This was the third thing that amazed us about Slovenia, the price. Everything seemed a lot cheaper than Australia, Ireland, even Saudi.
Both of us were both famished by the time we reached the city (just before noon). I ordered a famous Soca valley trout (which turned out was my only sample of the week-long trip), it was delicious. I also had my first Laško beer (which due to my current circumstances) tasted better than life itself upon first, and subsequent tastings. We spent the rest of our day in the city mainly eating and drinking. That evening, my wife was quite happy to stumble across a pop-up market (open kitchen) that was buzzing with people.

The next morning, we left for Bled. However, the night before a local barman warned off visiting Lake Bled as it was a tourist trap, we were told to go to the nearby Lake Bohinj as it, "was much nicer”. He was not keen on the bigger more glitzy lake, or on his country in general, he seemed genuinely shocked that we had chosen to spend 6 days in his country.

We couldn’t understand his disillusionment, we especially couldn’t understand it when we arrived in Bled and saw the lake for the first time. Sometimes nature has a nifty habit of amazing and perplexing you with its beauty, Lake Bled was one of those times. Sure it was a lot more touristy and crowded that it’s more tranquil neighbour Bohinj, but it had a church on an island in the middle of its waters, and on the northern shore the impressive Bled Castle looked down on all this splendour from afar, that was more enough for us.

Our accommodation offered complimentary bicycles which we duly availed of for the afternoon to cycle around the lakes shore. Our host Peter seemed to be the opposite of the Ljulbalanan barman as he came across as being not too pushed about Lake Bohinj, in fact, he gave the impression we should be staying in Bled for the duration of time in Slovenia.

It is easy to see how Lake Bled is one of the country’s top attractions. The minute you come down the slight slope of the town’s main street you can see in all its shimmering beauty. We invested in a Slovenian walkways book before leaving on our trip and were now cycling to the point where it claims the best views of the lake can be found. We parked our bikes at the foot of a big hill and followed the directions of the book onto the walkway up the steep hill. Ashamedly, and much like a petulant child I threw a mini strop two minutes into our walk and bemoaned having to walk all the way to the top while I felt we had a more than sufficient view where we stood. Thank god my wife was having none of my nonsense, and within 15 mins or so we were indeed at the best viewpoint of the whole lake (see below).


After we descended from our mini-hike, we jumped back on our bikes and decided to see if we could acquire one of those charmingly dressed men from the Rick Steeves DVD to row us over to the church. We found a group of the said men (not in authentic dress) looking a tad on the surly side on the edge of the lake. They were chain smoking aggressively and blathering to each other in Slovene while not looking a bit bothered by the random assortment of tourists hanging around their fringes. Upon enquiring, we found that seeing as it was out of season there would be no boatmen to row us over, but we could hire a boat and row ourselves. And so it was decided (by my wife) we (I) would row out to the church. This was turning into a triathlon.

We found an elderly man with boats for hire a bit further up the shoreline. Ten euros later we were on the lake and after a less that graceful departure from the dock I laboured out towards the island. After a bit of huffing and puffing, we made the island. We visited the church, rang the bell for good luck, had tea and left. Back on dry land, we continued our bike ride stopping off for food while resisting the urge to have a Bled cake (we said we’d hold off until that night). We visited the castle with its likewise impressive views of the lake before cycling back to our accommodation. We were in a rush to see the other Lake Bohinj before the day was out. Bohinj, some twenty minutes away was a bit of a comedown after Lake Bled, stunningly beautiful in its own right (it was easy to see how more naturalistic locals would favor it over Bled), but it didn’t do much for us. The rest of the night was spent in Bled trying to find a place that sold the famous Bled cake…surprisingly, there was none.
The next morning we hit the road via the nearby Julian Alps to the village of Plave (where our homestay host for the next two nights lived). After leaving Bled, we were stunned to find ourselves surrounded by snow, snow metres deep, either side of the road. This countryside was the polar (pardon the pun) of Lake Bled. We had hoped to drive the length of the Vrisic pass but our plans were scuppered when we found out that the road was closed further on, we were roughly 20 minutes into a drive that technically we shouldn't be on.
This unfortunate road closure meant we'd have to detour into Italy to take the alternative route onto Plave via the towns of Bovec and Kobarid. We stopped on the way to Bovec on another walk the book suggested, this time to the top of a waterfall Slap Boka. Slovenia didn't tone down the beauty as we ascended the steep (seemingly easy) loose gravel path to the top of the hill where the waterfall cascaded down the rock face into the beautiful Soca Valley below.

We arrived at Vesna's home towards nine o' clock after visiting both Bovec and Kobarid. Despite the lateness of our arrival, Vesna, and her dad greeted us like long lost relatives. After our friendly welcome, Vesna prepared some delicious homemade herbal tea and cake. The following morning after some more delicious tea, bread, cake and homemade jams fresh from Vesna'sfather's meticulous garden we set off on a day trip organised by Vesna's company. 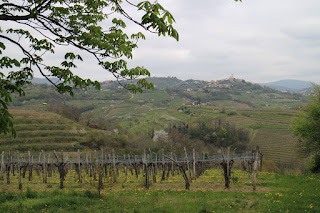 Vesna drove us to our starting point-the carpark located at Dobrovo castle for our round walk that would take us through the various charming villages and countryside. We stopped in the medieval village of Šmartno where we had a unique olive oil degustation, a nice meal and delicious dessert. We continued on our walk, stopping occasionally to take in the beautiful countryside before we reached our first wine tasting. The amiable host showed us around the impressive home run business. We arrived back to the carpark before hopping in Vesna's car for the drive to  Nova Gorica. We visited our second winemaker, an entrepreneuring young man, who was running his&nbsp family's business. He told us how it could have been all so different but only for the bravery of his grandmother, who was willing to defend her home from some  marauding Nazi soldiers. Again I sampled the majority of the wine and hams, which suited me fine.

Nova Gorica is right on the border with Slovenia's bigger and famous neighbour Italy. This town and region had a turbulent often bloody past from World War I through to the fragmented Yugoslavian republic, most of these disputes were over land and territory. We visited a once divided cemetery, that overnight, was divided between Slovenia and Italy. Vesna told us how single graves lay in both countries, and how a family could only visit part of the grave throughout the year while they had a few days window to visit the 'Italian part' of the grave. We walked through the proud allotments on the outskirts of the city. The spring evening was alive with tenants carefully tending to their crops and plots. We arrived back to Vesna's full of new knowledge and wonder. Before bed, we sampled some of Vesna's homemade herbal Jagermeister which was a first, needless to say, upon my head hitting the fresh herbal infused pillow I was out in a flash.

The next day we headed off for the karst region and Vipava valley region of Slovenia. Again, the landscape was quite different in this part of the country, more rocky and barren that we had seen before. However, the villages were equally quaint and well kept as before. We visited our third winemaker of the trip. This family run winemaker also sold it own cured hams and prosciuttos that followed generation old processes and recipes. We sampled a bounty of food and I drank the majority of wine (which suited me fine) as my wife was driving and Vesna was driving back to her apartment in Ljubljana later in the day. Vesna had one more location for us to visit before we parted ways in Nova Gorica. We visited a collective of sorts, it was was essentially a large shed/warehouse that was converted into a restaurant eight times a year so as the local producers could sell off their produce and wines before the new harvests began.

The food was hearty but we barely touched it, as we were more than full from our previous eating that morning. An impromptu photo with a local fellow diner and farmer lead to us acquiring two more bottles of local wine. This was just another example of Slovenian hospitality, we thanked him greatly for his gift. We dropped Vesna off in Nova Gorica and said our goodbyes and thank yous. She was a great guide and fountain of knowledge on all things Slovenian. Thank you, Vesna!